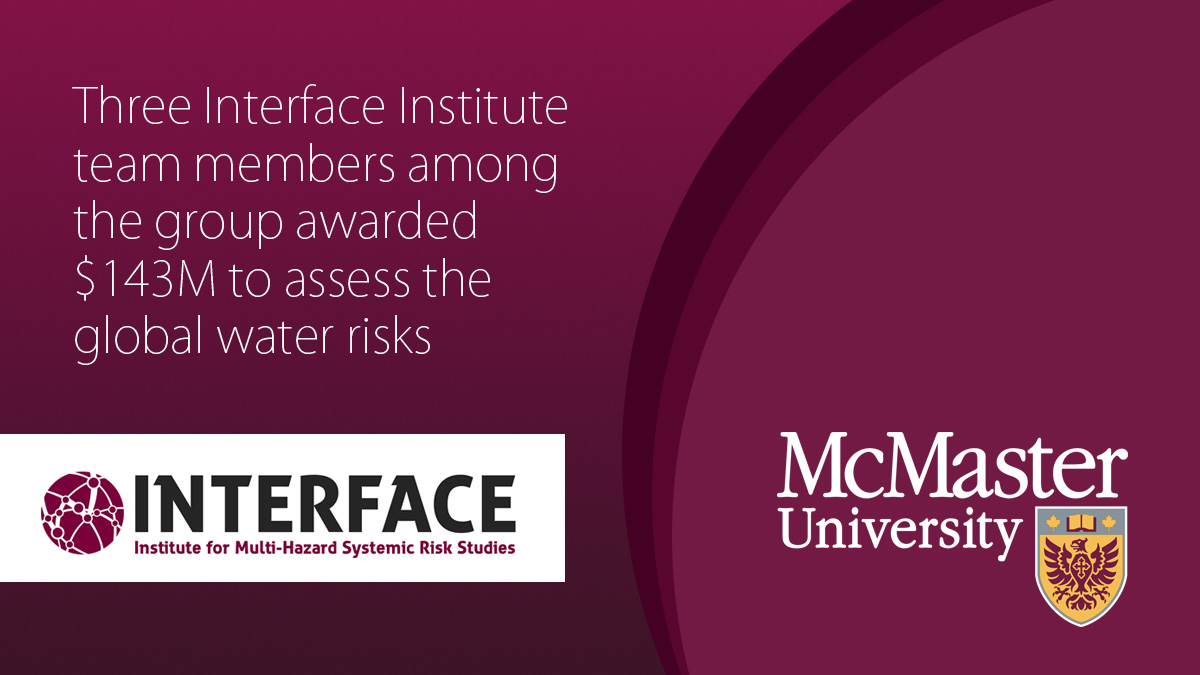 With more than 140 partners around the world, the research will position Canada as a global leader in cold regions water science. The seven-year program will develop ways of forecasting and mitigating water-related threats—such as devastating floods, droughts and degraded water quality—that come with changing climate and expanding economies.

“With this unprecedented investment and one of the largest research collaborations in the world, we will transform the way communities, governments and industries in Canada and other cold regions of the world prepare for and manage these increasing water-related threats,” said University of Saskatchewan President Peter Stoicheff.

With today’s announcement by Canada’s Minister of Public Safety and Emergency Preparedness Ralph Goodale, the U of S becomes the only university in Canada to be awarded two prestigious CFREF grants—investments which aim to catapult Canadian science to levels of global impact. The university also received a $37.2-million CFREF for food security research in the inaugural national competition last year.

“This funding will allow researchers and students at the University of Saskatchewan to better position Canada as a global hub for leading-edge, user-driven water science for the world’s cold regions,” Minister Goodale said. “With the steady march of climate change and its impact on water, this knowledge base will be increasingly important for our vital efforts to mitigate and adapt to rapidly evolving circumstances—including right here in Saskatchewan.”

The prestigious award is one of only 13 across the country. Contributions from the U of S ($17.5M) and its three partner universities—the University of Waterloo ($15M), McMaster University ($12.1M), and Wilfrid Laurier University ($10.6 M)—as well as international organizations and industry, bring the total program budget to $143.7 million over seven years.

“No institution nationally or internationally has assembled such a large-scale and multi-disciplinary water research initiative of this kind,” said Howard Wheater, Canada Excellence Research Chair in Water Security and director of the U of S Global Institute for Water Security, who will lead the CFREF-funded program. The grant is the largest ever awarded to the U of S.

The U of S-led water research network will involve more than 380 Canadian university researchers at 18 universities in a wide range of disciplines, 19 federal and provincial agencies, seven Indigenous communities and governments, 39 industrial collaborators, 15 non-governmental agencies, and 45 international research institutes. Researchers will also work with international organizations such as UNESCO, the World Climate Research Program and Future Earth, to develop the tools and models to mitigate water disasters, protect the environment and take advantage of economic opportunities.

With climate change and increased human impacts on the environment, Canada is witnessing unprecedented flood, drought and poor water quality incidents, said John Pomeroy, Canada Research Chair in in Water Resources and Climate Change, and associate director of the new program. Economic losses from extreme events such as catastrophic floods and droughts have cost Canada an estimated $19 billion so far this century.

Researchers will use a transformative “big data” approach to water scenario modelling, and will develop marketable, new monitoring and predictive tools and technologies, Pomeroy said. New simulation models will enable communities and industries to predict the timing, location and severity of extreme events. New apps and other innovative tools will be developed to support informed decision-making.

“When this program is done in seven years, we will have designed and helped to implement a national water system to measure and forecast floods, droughts, water quality and water-related health problems in Canada, and we will have developed models for improved water governance and equity between upstream and downstream users,” he said.

The program will engage stakeholders in developing risk management solutions. For instance, it will build on relationships with Aboriginal communities in Canada’s North and along the major rivers and lakes to help solve growing water challenges in those areas.

“This research will vastly improve Canada’s water security and capacity for predicting where water will be, how much will be there, and how safe it is,” Pomeroy said, noting that such knowledge is critical to the prosperity of Canadian industries including oil and gas, agriculture, mining, insurance and power generation.

Here’s a look at some of the other McMaster research leaders involved in the project:
– Yiping Guo, a professor of Civil Engineering who specializes in the planning, design and analysis of water supply and distribution, storm water management, and other water resource systems.
– Paulin Coulibaly, a professor who holds joint appointments in Civil Engineering and Geography & Earth Sciences, and is scientific director of FloodNet, a Strategic Research Network which develops advanced tools and technologies to protect Canadians from the damaging effects of floods.
– Sarah Dickson, the Director of the McMaster Water Network and an associate professor in Civil Engineering, whose research focuses on developing a holistic approach to water security in rural, remote and otherwise marginalized communities.
– Altaf Arain, director of McMaster’s Centre for Climate Change and a professor in the School of Geography & Earth Sciences who studies climate change and extreme weather impacts on vegetation ecosystems and urban environments.
– Patricia Chow Fraser, a professor of Biology and a leading researcher in freshwater and wetland ecosystems, particularly the Great Lakes.
Nancy Doubleday, an associate professor of Philosophy and an Associate Director of the McMaster Water Network, who holds the Hope Chair in Peace and Health, and is also a lawyer and a specialist in ecological sciences who works at the intersection of human rights, health and the environment.
– James Smith, a professor in the School of Geography & Earth Sciences who specializes in the study, monitoring and remediation of groundwater and soil contamination.
– Greg Slater, a professor in the School of Geography & Earth Sciences who studies organic compounds, particularly contaminants, and the interplay between industrial society and the environment.
– Michael Waddington, a professor of Geography & Earth Sciences and a member of the Centre for Climate Change who specializes in the relationship between wetlands, drought and wildfires.
– Susan Watt, an emeritus professor of Social Work specializing in health care and social policy who has worked with the United Nations University Institute for Water, Environment and Health.
– Joanna Wilson, an associate professor of Biology and Associate Director of the McMaster Water Network, who specializes in the effects of environmental contaminants on aquatic species.