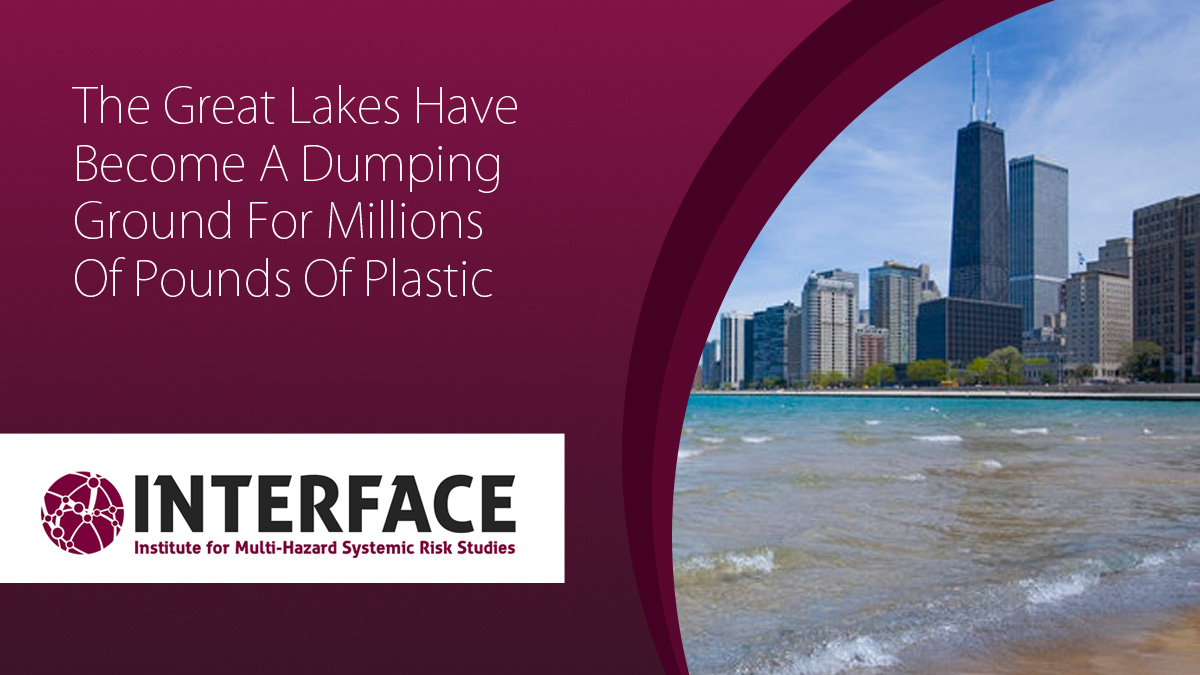 The amount of plastic that enters Lake Michigan alone each year is equivalent to 100 Olympic-sized pools full of plastic bottles, a study finds.

About 21.8 million pounds of plastic flow into the Great Lakes each year, new research from the Rochester Institute of Technology shows.

Over half of the plastic debris, or 5,300 metric tons, has ended up in Lake Michigan yearly, study estimates found. That’s equivalent to 100 Olympic-sized pools full of plastic bottles, the researchers said.

They calculated the amount of plastic flowing into the lakes using population totals along the shores of each of the five lakes and existing estimates for the amount of plastic waste individuals produce and how much of that ends up reaching water. The formula is based on one that researchers used last year in a study that estimated about 8 million tons of plastic enter the oceans annually.

Though their totals make sense compared to the ocean numbers, the quantity is still “startling,” Hoffman said.

“The size, I think, is the first thing that jumped out at me,” he told The Huffington Post.

Using data from the National Oceanic and Atmospheric Administration Great Lakes Coastal Forecast System the research team simulated the movement of plastic particles entering the lakes between 2009 and 2014 to see where currents carried them.

Hoffman originally wondered if they’d find any indication that debris collects in specific areas of the Great Lakes, similar to the “garbage patches” formed in the Pacific Ocean by current and wind movement. Instead, they found that while particles do occasionally accumulate, sustained wind events periodically pushed them to shore.

The difference might actually make it easier for people to care about the environmental effects of plastic pollution, Hoffman suggested.

“Abstractly, this feels awful, but it’s also far away from us,” he said about garbage collecting in the middle of the ocean. “In the Great Lakes, it’s coming back on the shores and we’re going to encounter it a lot more as humans.”

Plastic makes up more than 80 percent of the garbage that litters Great Lakes beaches, another study found last year. Hoffman said plastic’s impact on the environment, animals and humans is “still one of the big unknowns.”

“We hope that this is a good first step in spurring other studies, other interest in the Great Lakes,” Hoffman said.

Environmentalists and researchers have, in recent years, called attention to the problem of microplastics getting into lakes, rivers and the oceans. Tiny particles of plastic, called microbeads, have been used in products like exfoliating face wash and aren’t always effectively captured by waste treatment plants. A 2013 study that counted microplastics in several sample areas of the Great Lakes found an average of 43,000 particles per square kilometer.

Companies including Unilever pledged to phase out microbeads, several Great Lakes states considered bans and President Barack Obama signed legislationlast year that will prohibit microbeads in rinse-off cosmetics. However, a loophole allows companies to continue using microbeads in other products, from detergents to sandblasting materials. It also didn’t apply to other types of plastic debris, like microfibers ― one source of those is fleece clothing, which sheds tiny plastic fibers when you wash it.

“The microbeads were definitely an issue, but that’s not all the plastic that’s getting in” the Great Lakes, Hoffman said. “That hasn’t been solved. … With the microbead ban, there’s a tendency to feel like, we did something. Which is great, but there’s still more that needs to be done.”

Hoffman acknowledges that their calculations are only estimates. Their model doesn’t account for a number of variables that could affect how plastic travels in the lakes, including particles’ size and type, their vertical movement and specific weather events. However, they compared its outputs to earlier research that collected actual samples of plastic debris in small areas of the lakes and found that their results were a decent match at most of the sample sites.

Link to the Article